Unguja Island, popularly known as Zanzibar, is just off the coast of Tanzania and forms part of a larger group of islands called the Zanzibar archipelago, many of which are uninhabited. This exotic and mysterious island has enticed travellers and traders for many a century.

Being in the middle of the Indian Ocean, Zanzibar has influenced the trade routes of both traders and colonists. It became a power to be reckoned with in its early years, supplying the world with slaves, gold, ivory and silks. Trade with the east brought Islam to the islands, making it an important part of Zanzibari culture.

Steeped in colonization history, from the Portuguese to the Omani Sultans to the British, today Zanzibar provides an idyllic escape from the pace of the modern world. The turquoise sea provides the ultimate place to reflect and unwind. Set your watch back 20 years and experience a unique destination for those in pursuit of romance, adventure or simple relaxation. 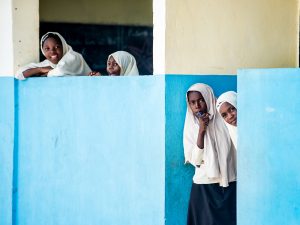 The village is the seat of an education project aimed at providing computer literacy to the population of the area, as well as the Dada cooperative that is intended to create job opportunities for Zanzibari women involving them in the processing and preparation of handmade cosmetics and food products such as jam , mustard and sweets that are sold to us to support the project.

There is a charity school in Matemwe, Tamani Foundation, which is another long lasting partner of ours who we support with school materials and where we regularly go with our guests.

Fresh fish and seafood is bought locally along with fruit, coconuts and other products to help sustain the villagers. Staff are also employed from the neighbouring village to achieve sustainable tourism.